-A guest post by the inimitable Liz Faria of A Mothership Down . . .

Something that I’ve long known has come to the forefront of my attention lately, which is that I am a total disaster as a hostess. Am I friendly and inviting toward guests? Sure. But my skills stop there. I simply cannot get my shit together to properly host womanly events, and I’m almost 35 years old, for goodness sake. Time to STEP IT UP.

This problem – my ineptitude when it comes to certain domestic expectations – first surfaced in my mid-twenties, when the type of college parties I was used to throwing were no longer acceptable. You know, once it was no longer the norm to buy a keg and huge plastic tarps for the floor and call it a day. 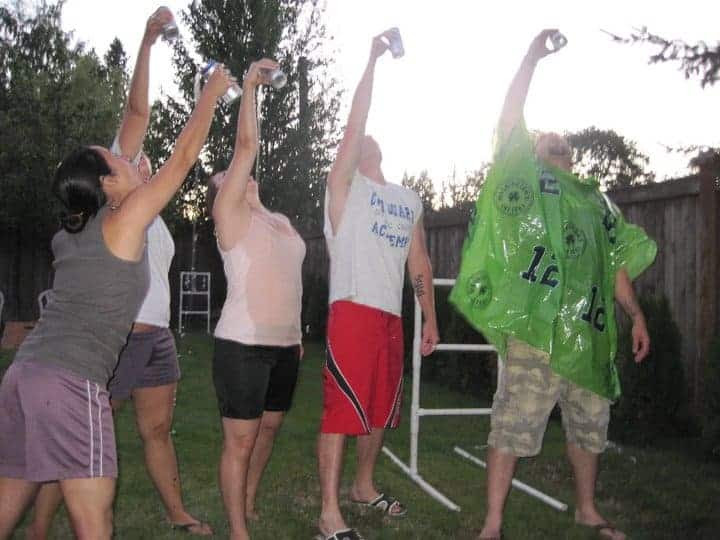 I was good at those kinds of parties, and good at finding ridiculous props and joke items to add flair to events. Kiddie swimming pool for the living room at a “spring break” party? Check! Sombreros from the dollar store? Check! 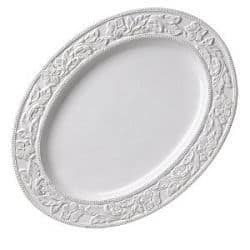 The level of my problem became apparent circa 2003, when I was invited to a girls only TV night/dinner. I understood the event to be a sort of “BYOF” deal (bring your own food). So, I picked up a steak bomb and threw 4 stray beers into a plastic bag and headed on over. As soon as I arrived at the gathering I realized my error. All of the other girls had come bearing lasagnas, quiches, salads to share and the like. Nobody else had loose Bud Light cans in a plastic bag. Certainly nobody else had a personally sized steak bomb. When did this social seismic shift happen? Well, at least a decade ago, apparently. I just missed it.

But all that is going to change.

Why is it going to change now, a decade after first recognizing my problem? Because in the last few weeks I’ve twice attempted to host small scale events, and both times I was in a panic, paralyzed by my inability to put together even a basic spread. Also, I have a CHILD now, good Lord. For the sake of my baby and our future as a normal family, something’s got to give.

I had a few local mom friends and their babies over a few weeks ago at 11:00 a.m. on a weekday. Some people might say to themselves, in that situation, maybe I will pick up some orange juice and bagels! Perhaps some fresh fruit. I picked up three $2 bottles of wine at Trader Joe’s (which, can I just say – what a deal!), and some spaghetti. I got one jar of sauce and reheated some eggplant parmesan that Brian had made 4 days earlier. Voila! A lovely (albeit heavy) mid-morning Italian spread. I rationalized this menu with the thought that people with babies always show up late to events, and even though I invited people for 11:00 they would probably show up at noon, and noon is a fine time for a drink. Any earlier would just be tacky. 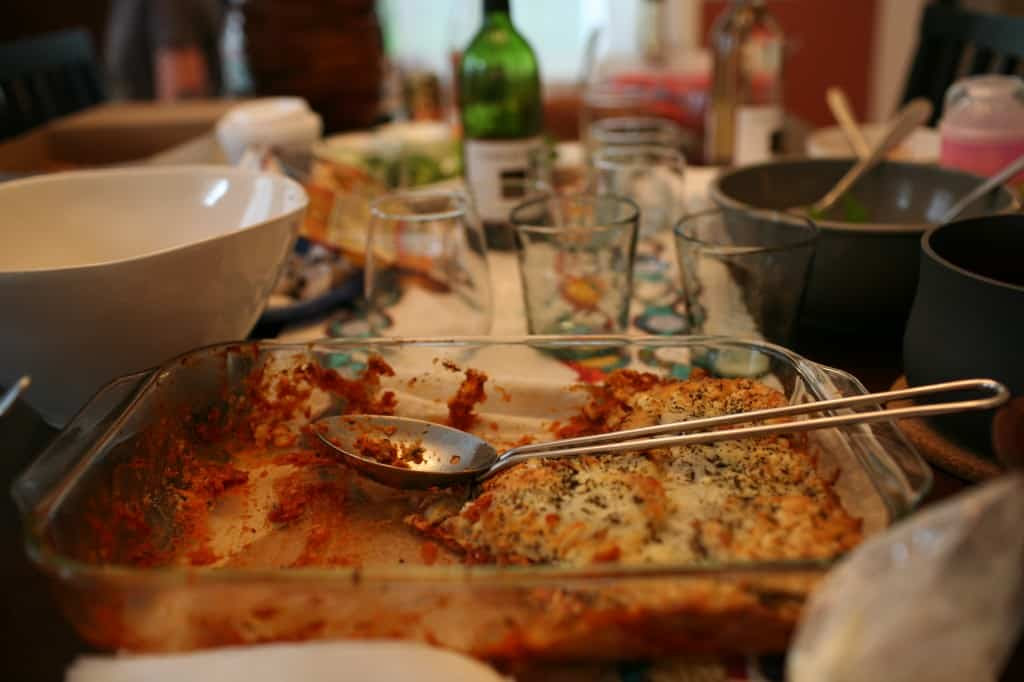 I also realized that I should clean up a bit for this event (note: my house is always neat. Neat and clean are different. It’s not always clean). Anyway, I noticed that my rug had a lot of hair on it (which is common given the fact that Nolan and I are both part wolf), and there were going to be lots of little kids sitting on the floor. So I considered vacuuming for a second, but I still have some trouble managing our vacuum cleaner with all its various functions. I ended up compromising by picking up stray hairs off the ground with my fingers. I didn’t feel totally great about this. 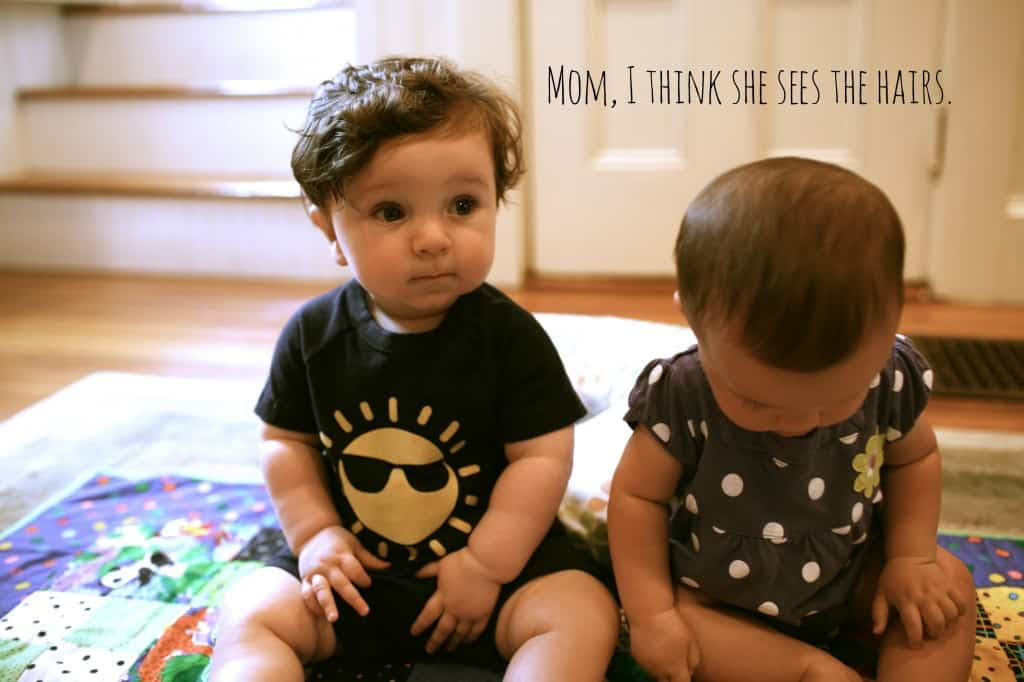 And then for the 4th of July I had an out of town friend visiting, so we had a few people over for a small BBQ. This was a low stakes event by all accounts. Just some grilling of hot dogs and hamburgers, which Brian was in charge of. Thirty minutes before party time and it came to my attention that we had absolutely nothing ready for guests, and so I threw some chips in bowl and put a bunch of waters in a cooler

. Did I realize that beer should go in the cooler, not water? No. Did I remember to set up any dips for the chips? No. Did I have napkins ready? No. Did I have anything ready whatsoever? No. Do people like Doritos? Yes. They really do. But that isn’t enough.

My friend Ben texted me before the BBQ to ask what he could bring, and I said a pizza. He thought I was kidding. I wasn’t kidding. This is the level I’m at.

Furthermore, in the last few weeks I have twice gone to events held by my sister-in-law Melissa, who is an amazing and very crafty hostess, and the juxtaposition between my events and Melissa’s was really just too dramatic to ignore. Check her out on Pinterest to see the level of craftiness and organization that she aspires toward (and attains!). It’s very impressive and also kind of cripples me, as I will never achieve this kind of excellence. At least I can go to her events and steal her food though.

Here are some photos from a baby shower Melissa just hosted for her sister Sue. I think you will see what I’m talking about.

Instead, I will do this:

I am going to plan my menu before I even invite any guests. That will ensure that I actually have food available for these guests, versus what I usually do which is invite people with no plan and then throw scraps of food at them.

Wish me luck. Dinner Party 2.0 will launch sometime before my 35th birthday next month. If you have any good tips for hosting that won’t cause me anxiety and/or distressed bowels as a result of anxiety please leave them in the comments section.

How hilarious is this woman??? I adore her way of turning the everyday into the extraordinary. For more from Liz, be sure to follow her on Facebook and Twitter.